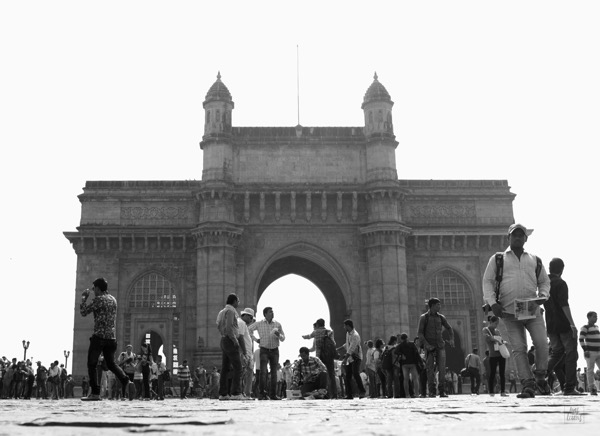 … And the exhilarating dance of explorations continues in black and white.

With the burst of color that greeted me at the airport, the intricate designs of the saris and the bright flavors of South Indian food, I never thought I would use black and white to take photos in India. But after taking shots of discoveries in Technicolor, I went back to the classics and explored more of India in hues of gray, black and white.

Kerala in black and white was as serene and calm as it was in its beautiful color.

Mumbai changed behind the lens. Its dynamic nature intact, it shifted to provide mystery and more character in subtle hues.

It was then I saw more lines that told tales, deep set eyes that had more wisdom, curious fingers pointing everywhere and sidewalk scenes you’d picture only in movies.

The streets of India lent so much more character in black and white just because the stories behind them fought for your attention more than the burst of color.

Again, riding solo was rather difficult in terms of getting the shots I wanted. I got busted several times while people watching; but they were gracious enough to forgive a lady with a camera and just smiled the tourist mistake away.

Sometimes I wonder where I get the courage to roam the streets without knowing where to go or where to turn. I guess it is in getting lost that I discover not only the peculiar “finds,” but also the realization that when you want something, you just got to go and do it. You’ll reach your destination at some point.

I realized this as I sat by the famous window at the Sea Lounge of the Taj (yes, the one that got bombed in 2008) overlooking the majestic Gateway of India sipping chai on a hot Friday afternoon.

I was sunburnt, tired, out of battery but extremely happy and satisfied. Got the shots that I wanted and learned a thing or two about sidewalk charms and history lessons 😉